In 2020, OGP celebrated a legacy of 75 years at the forefront of optical inspection, measurement, and dimensional metrology

Who We Are and What We Do

First introduced in 1992, our famous OGP SmartScope® product family has become one of the world’s most popular and versatile dimensional measurement systems. SmartScope systems are designed and produced at QVI corporate headquarters in Rochester, NY, USA.

Our customers include automotive, aerospace, ceramics, electronics, semiconductors, plastics, biomedical device manufacturers and metalworking industries, among others. These manufacturers rely on OGP measurement systems as integral parts of their manufacturing processes.

With over 75 years of technical innovation for metrology, OGP is recognized worldwide as a customer trusted supplier of non-contact and multisensor dimensional measuring systems. In today’s world, improved productivity is everyone’s goal. OGP’s innovative measurement technology provides precision for people – precision measurement systems designed for the people who use them. In 1945 a new company was formed in Buffalo, NY to support the fledgling optical comparator industry. Engineers Specialties Division (ESD) of the Universal Engraving and Colorplate Company began manufacturing staging fixtures and chart-gages. After moving to Rochester, NY, ESD was purchased by a group of employees and re-formed as Optical Gaging Products, Inc. (OGP®) and Projection Gages, Inc. (PGI).

OGP began a working relationship with Eastman Kodak Company as the exclusive distributor for the Kodak Contour Projector®. OGP rapidly expanded and became a national leader in optical inspection. In 1955, one of the founders of OGP, Edward C. Polidor, formed Automation Gages, Inc., a firm specializing in highly customized inspection equipment. The equipment designed and manufactured by Automation Gages filled such diverse needs as automatic measuring of germanium transistor wafers to evaluation of the wash-and-wear characteristics of textiles.

Automation Gages soon became the national distributor for Bausch and Lomb scientific industrial products, including optical comparators and analytical microscopes. In 1959, OGP found its way to Detroit and became part of the Ex-Cell-O Corporation when Kodak sold the Contour Projector Line.

To meet future challenges, Automation Gages embarked on a program to build the core technologies needed for market leadership. Between 1969 and 1973, they acquired General Measurement Research, Inc. (manufacturer of the Digital Incremental Glass scale system), Visual Inspection Products (designers and builders of chart layout machines and 1:1 pantographs), the optical comparator product lines from Ex-Cell-O and Bendix Measurement Division, and, finally, Optical Gaging Products, Inc. All operations, including manufacturing, were consolidated under one roof in Rochester, New York in 1973.

A reflection of OGP’s 75 Years of Advancing Optical Metrology This addressed a need in the textile industry for inspection and sorting of fabric in order to receive the “Sanforized” label. The world’s ﬁrst video inspection system debuts. An early look into the future, the Model 875 clearly demonstrates the capabilities latent in this technology. OQ-30, a side screen Contour Projector with a revolutionary granite surface plate foundation, is introduced. This patented innovation, with its unique paraboloidal
reflector, enables high magnification inspection of
surface details for the first time. The world’s first side table optical comparator, dubbed the “projector for the eighties,” quickly becomes an industry favorite due to its innovative design. OGP leads the way again
with the introduction of the
first video system designed
specifically for ease of use
and low cost. Introduced as one of the world’s first multisensor
coordinate measurement systems, the IQ-2000 can
be equipped with vision, touch probe, and laser
scanning sensors.

SmartScope® brings fully automatic 3-D measuring
to the benchtop at half the price of previous
systems. Its color camera, programmable zoom lens,
and easy to use software quickly make it the world’s
most popular non-contact measuring system. Features normally found only on
larger systems are now available in
one compact, benchtop system.

These revolutionary optics are
the first to display fully corrected
images for both direct projection
and surface illumination. An ultra-accuracy, small travel system designed
specifically to meet the needs of the growing
micro-manufacturing industry. Volumetric accuracy is better than one micron (0.001 mm). A patented, multiple ring LED illuminator offers
unparalleled flexibility for video measuring systems.
With it, lighting is controlled for brightness, angle of
incidence, and direction. A new patented profile illumination featuring a linear array of LED lights is introduced. LEDs are
illuminated sequentially to track the optical system as it moves in the x-axis. The number of LEDs illuminated,
and their individual brightness, is changed depending on the zoom magnification level to match the numeric aperture of the optics. Capable of extreme accuracy for surface topography by using the concept of chromatic dispersion, this sensor
determines change in the height of a surface by
measuring the color of the reflected light it sees. Innovative all-LED TruLight® illumination, a world-first use in optical comparators and eCAD®, an electronic overlay package that allows a CAD model to project virtual charts onto the comparator screen, for
comparison with part images are applied to new benchtop
horizontal Contour Projectors®. The TeleStar® TTL interferometric laser uses innovative electro-optical technology. In interferometry, light from a single coherent source is typically split into two beams that travel in different optical paths, which are then combined again to produce wave interference. The resolution obtained with interferometry is correlated directly to the wavelength of the light. QVI® develops a new telecentric optical system
specially for shaft measurement and coupled
it with a new mechanical system that allows the
optics/illumination/camera to scan the shaft while it is
rotating. VersaFlex™ packages up to three sensors in one cluster. The optical/video probe combines precision optics, imaging, and illumination in a compact and powerful
sensor assembly small enough for use on an articulating probe head.

The TeleStar interferometric laser is packaged into a “pen” to allow this very high resolution sensor to be used with the VersaFlex cluster, or deployed off-axis on systems that do not use the TeleStar zoom lens.

Our main headquarters, engineering, and manufacturing campus is located in Rochester, NY, a global center of excellence for optics and imaging science. Our campus near downtown Rochester encompasses more than 250,000 square feet of manufacturing space.

Opened at its present location in 2012, the Quality Vision Services’ (QVS) Dayton facility is the headquarters and U.S. Customer Center for our Certified Comparator Products division. The facility includes a total of 19,500 square feet for manufacturing, warehouse, office, training, and demonstration. Dayton is the site of CCP’s extensive comparator re-manufacturing operations.

Our facility in Budapest is home to Kotem, Ltd., world leaders in GD&T evaluation and best fitting software for computer aided manufacturing. In addition to OGP software development staff, the facility also includes show rooms for demonstration and application development on OGP products for customers in Central and Eastern Europe.

Our OGP branch based in Turin, Italy, specializes in our Itaca flexible gaging systems and software for applications requiring tactile probing.

QVI Japan is a partnership between QVI and YKT Corporation. QVI Japan houses a staff dedicated to customer service and software localization and special application development for the Japanese market.

The Pune office joins the existing office in Bangalore and will act as base of operations for sales and service of OGP products.

The Association For Manufacturing Technology

Quality Vision International is an ISO 9001:2015 registered company. The scope of certification covers QVI and subsidiary operations in North America.

Quality Vision Services – our field service and calibration division for North America – is certified to the ISO 17025-2005 standard for testing and calibration laboratories. 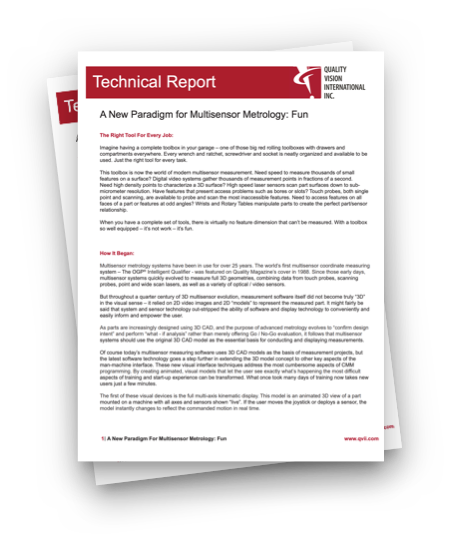 Thank you for your interest in

OGP Authorized Representatives are metrology specialists, qualified to evaluate your measurement requirements and recommend the solution that best fits your needs.

Your local representative is ready to help you with product details, demonstrations, training, or purchase information.